Two significant engagements, Monmouth and Rhode Island, essentially marked the end of activity in the northern theater, and the massacre at Wyoming set in motion Washington's plan for the destruction of the Indian nations on the northern frontiers.

Salem County, New Jersey, is the state's deep south, where the Delaware River broadens into the Delaware Bay.  The battles that took place here were an effort by militia forces to protect the activities of "Mad Anthony" Wayne.  Wayne crossed into New Jersey from Pennsylvania in February, 1778 to obtain supplies; Howe sent in 4,000 British troops.  When Wayne moved northward, Howe sent  Colonel John Graves Simcoe of the Queen's Rangers and Colonel Charles Mawhood with about 1,200 Loyalist forces.  They faced off against New Jersey militiamen at Quinton's Bridge (also Quintin's Bridge) at Alloway Creek on March 18, 1778 with four times the men.  While the British forced an American retreat they could not dislodge them from the other side of the creek and instead attacked at Hancock's Bridge.  There they massacred about 20-30 American militia at Hancock's House.  Considered technically a British victory, it achieved nothing of military significance.

The Battle of Crooked Billet on May 1, 1778 (now in present-day Hatboro, Pennsylvania), was one of the more extended skirmishes arising out of the competition for forage and supplies between British and American forces.  Another example of these smaller raids was in Newtown, Pennsylvania, where a raid on February 19, 1778 at the tavern resulted in five American soldiers being killed.   This was another British victory against local militia units. 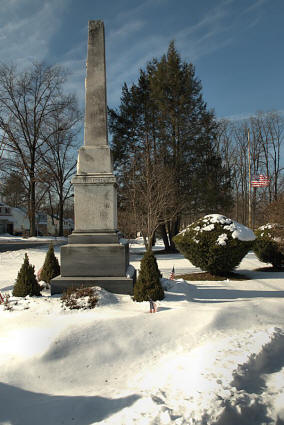 The Battle of Barren Hill, in Whitemarsh, Pennsylvania, on May 20, 1778 was the Marquis de Lafayette's first command and was almost a debacle for the Continental Army.  Washington sent him on a reconnaissance mission to gauge the likelihood of an attack on Valley Forge.  With 2,000 men, Lafayette camped near what is now St. Peter's Church and also positioned men on Ridge Pike.  On May 19, British General James Grant led 6,000 men and 15 guns up along Germantown Rod and to the north of St. Peter's Church to block Lafayette's retreat.  General Charles Gray led 2,000 British and Hessian Grenadiers to attack Lafayette's left.  Howe and Clinton moved up Ridge Road with 4,000 men to attack on Lafayette's right.  Lafayette learned of the impending trap when two of Gray's men were captured.  As General Enoch Poor's forces feigned an attack at the church, Lafayette led his men down Barren Road to the Schuylkill River and crossed at Matson's Ford.

After vacating Philadelphia, British General Henry Clinton sought to return to New York across New Jersey.  Washington pursued him, seeking the advantageous battle to regain the initiative.  On June 28, 1778, in brutal heat, the two armies, each fielding about 13,000 men, fought the longest battle of the war.   Technically a draw, the British continued their retreat and the army was not destroyed. After initial engagement with the British, General Charles Lee's forces dissolved in disorder and retreat.  Washington, arriving on the scene, rallied the American forces and reversed the tide of the battle.

The Battle of Wyoming on July 3, 1778 exemplified the brutality of the war and the involvement of Native Americans in the conflict.  A string of American forts along the Susquehanna River served the settlers in the Wyoming Valley, but became the subject of bitter action following the British defeats at Oriskany and Fort Stanwix in 1777.  Loyalists, British regulars and Mohawk, Onondaga, Cayuga, Oneida, Tuscarora and Seneca warriors, in a 700 man force under Major John Butler raided the valley.  Colonel Nathan Denison and Colonel Zebulon Butler commanded the Americans.   Some 375 Americans left Forty Fort and proceeded north on Wyoming Avenue.  They formed their battle line around what is now Wyoming and Fourth.  The American attempt to surprise the Loyalist forces failed when Indians detected the advance.   The Americans, greatly outnumbered, gave way, in varying degrees of confusion.  On July 4, Major Butler demanded surrender of Forty Fort.  Denison signed terms of surrender but later violated them and returned to fighting.  The British and Indian casualties were far less than the Americans, who not only lost over 300 soldiers but suffered significant civilian casualties as well.  Among the legacies of the battle was the rage that helped fuel General John Sullivan's campaign of devastation of Indian villages in the region in 1779.

The Battle of Rhode Island began as the force combined Franco-American effort following their official alliance, and ended up with a large scale but ultimately meaningless engagement.  The French fleet under Admiral Charles-Henri d'Estaing arrived in Newport Harbor on August 8, 1778 and the next day American forces occupied Aquidneck Island, with General John Sullivan in command.   The British, in occupation of Newport, abandoned their position at the Conanicut Battery and Conanicut Island and consolidated forces on Aquidneck Island.  French soldiers did not participate, however, as the effect of a British fleet and storm caused the d'Estaing to leave the theater.  Sullivan's 10,000 men faced a combined British-Hessian force of 6,000.  On August 29, the main battle occurred.  Green End Fort was a British position on the eastern side, attacked by the Americans.  The Hessians advanced northward from Newport along the west road and the British regulars moved northward along the east road.  In the area around the current Patriots Park and Lehigh Hill, the 1st Rhode Island Regiment repulsed the Hessians.  The British had advanced on the eastern side of the island to Quaker Hill.  Just to the north of that, on Butts Hill, was the American left.  On August 30, the Americans withdrew from  Aquidneck Island across the water to Tiverton and the mainland, where Fort Barton was located.

On September 27, 1778, British General Charles "No Flint" Grey led a Paoli-styled night assault, with no flint and bayonets only, against Colonel George Baylor's 3rd Regiment of Continental Light Dragoons while they slept in various houses and along what is now Rivervale Road, in Rivervale, New Jersey.  Baylor's force consisted of 12 officers and 104 enlisted men.  Grey led 12 companies of light infantry - 650 men.  Fifteen Americans were killed, and 54 wounded or captured.  Despite pleas for quarter, none was given, with the exception of one British captain, and the episode became the subject of intense American propaganda as to the brutal nature and atrocities committed.

Between October 6 and October 15, 1778, two of the more colorful military leaders of the Revolution clashed in a small town along the Mullica River, not far from contemporary Atlantic City.  Captain Patrick Ferguson led a force of 400 soldiers  to cut off the privateering activity in the area.  Washington sent General Casimir Pulaski and his Legion to protect the wharf at Chestnut Neck.  Ferguson found a small number of militia at Chestnut Neck and easily defeated them with minimal casualties, on October 6.   On October 4, Pulaski left Trenton and on October 8, reached Tuckerton (then called Middle of the Shore).  After a week of watching each other, Ferguson surprised one of Pulaski's outposts on October 15 with 250 men, and in essentially a bayonet attack, destroyed the outpost and left.  Peckham in The Toll of Independence reports 5 American dead, 20 wounded and 5 captured; reports of American dead from the British side numbered 50. 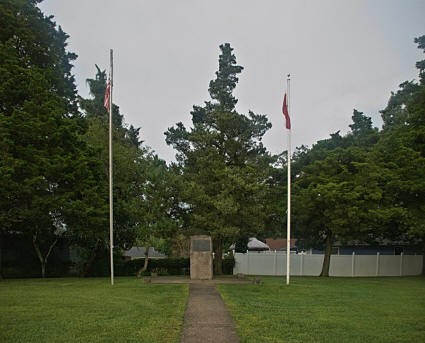 On December 28, 1778, Savannah fell.  Following their futile capture of Philadelphia and the subsequent retreat across New Jersey to New York, the British embarked on their Southern strategy.  Savannah, an important trading port and the then capital of Georgia remained in British hands until 1782.  Lieutenant Colonel Archibald Campbell (who had been captured and exchanged for Ethan Allen) and General Augustine Prevost led approximately 3100 men.  The force consisted of two battalions of the 71st Highland Regiment, two Hessian regiments and four Loyalist companies, including artillery.  They landed to the east of the city (the marker below notes the position).  The Americans under General Robert Howe were outnumbered, with only about 850 Continental and militia soldiers and four pieces of artillery.  Campbell's forces, led by a slave through a swampy area apparently unknown to the Americans, succeeded in attacking the American rear, throwing them into panic.  Seven British soldiers were killed and seventeen wounded.  American casualties were severe with 83 killed, 11 wounded and 453 captured.  Howe was later subject to court martial on the grounds that he had not adequately defended that pass but was acquitted.