After six years of fighting, this was the decisive year of the revolution.  American General Nathanael Greene showed his genius in the Southern Theater, and British General Charles Cornwallis's costly victory at Guilford Courthouse led him to his fate at Yorktown, abandoned by British commander Henry Clinton.

On January 17, 1781, following several defeats in the late Southern campaign, General Nathanael Greene, now in command of the American forces, deployed General Daniel Morgan to Ninety Six, South Carolina.  Upon learning of his encampment along the Pacolet River, British General Charles Cornwallis sent Colonel Banastre Tarleton to engage.  Following reconnaissance by American cavalry that detected the British, Morgan situated his forces on tactically sound terrain at Hannah's Cow Pens.  He set up three lines of defense, headed by a skirmish line with sharpshooters, who successfully decimated the British officers.  The Americans inflicted severe casualties on the British, who were lured into the American defenses thinking the Americans were retreating.  Beyond the significant boost to morale for the Americans, it waylaid British plans for retaking the Carolinas.

Andrew Pickens, a veteran of the Anglo-Cherokee war of 1760-61, had fought at Kettle Creek in Georgia, was cpatured during the siege of Charleston in 1780, and follwing parole and his claim that the British violated the terms of that parole, rejoined the war and fought at Cowpens, Augusta, Ninety-Six and Eutaw Springs.  A brigadier general, he and Colonel Henry Lee commanded the American militia.  John Pyle was a Loyalist physician who led a militia unit.  He was on his way to join Tarleton when he encountered Lee and his men; Pyle was deceived into thinking these were Tarleton's forces.  As Pyle's men stepped aside, the Americans opened fire.   Lee's men's uniforms consisted of short green jackets and plumed helmets, similar to those worn by Tarleton's dragoons.  In this engagement fought on February 25, 1781, 93 British were killed and 250 wounded.  This was a blow to the British efforts to recruit Loyalist support at a critical juncture of the war and the effort to develop armed resistance to the Americans in the South. 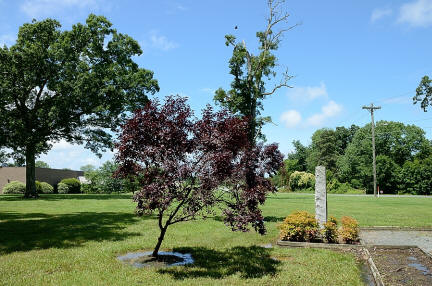 The Battle of Clapp's Mill, on March 2, 1781 was a relatively small engagement.  Greene attempted to lure the British into an ambush.  Around 5,000 soldiers on both sides were involved in the action.  The British drove the Americans back after brief fighting, but did not pursue.

A technical victory for General Charles Cornwallis against American General Nathanael Greene, British casualties were devastating - a quarter to a third of the British army - and  the British were forced to abandon the idea of maintaining the Carolinas.  Fighting occurred in thick woods.  Cornwallis won at cost - not only in total casualties, but in a desperate decision to bring artillery fire to bear even at the expense of firing on his own troops.  The Americans established three lines, and yielded when Greene determined enough damage had been done and the Americans could no longer hold.

In March 1781 General Nathanael Greene returned to Camden, South Carolina, rather than chase Lord Cornwallis into North Carolina, to attack the various British posts.  Cornwallis continued towards Virginia, but send Lord Rawdon to engage Greene.  They met at Camden, in the area of Hobkirk's Hill, on April 25, 1781.  Rawdon commanded about 900 men and two six-pounders; Greene about 1,200 to 1,300 men and three six-pounders.  Rawdon attempted a deception in his troop movements, and planned to attack the American position on the hill.  The attack was met with the American artillery and a counterattack that halted them.  The British, though, killed one of the American commanders, throwing his company into confusion, which retreated.  This provided the opening for a British push.  With the British taking the hill, Greene ordered a retreat.  Unaware of the situation, Lieutenant Colonel William Washington managed to get behind the British and take prisoners.

In 1781, Benedict Arnold was a Major General in the British army and landed in the Chesapeake with 1,500 men, as part of Cornwallis' plan to attack American supply bases in Virginia and force Greene to divert resources from the Carolinas.  He successfully raided Richmond on January 5.  Arnold left for Portsmouth and was told by Clinton to stay there.   Washington sent Lafayette to seek out Arnold as well, assisted by the French navy, but that effort was unsuccessful.  On March 26, British Major General William Phillips arrived at Portsmouth with 2,000 troops.  They moved up the James River on April 18, took Williamsburg and burned the Chickahominy River shipyard.  Phillips landed at City Point, about 12 miles to the northeast.  Major General Baron von Steuben, in command of a militia force, sought to check these activities.  The only assistance in the area was General Peter Muhlenberg and about 1,000 Virginia milita.  The decision was made to protect the supplies at Petersburg.  Muhlenberg and von Steuben established their initial position at Blandford. The American first line of defense anchored on the left at the Appomattox River and stretched to the present Washington Street along East Street.  The British attacked here on April 25, 1781, set up artillery overlooking the area, and set in motion a flanking movement around the American right.  The Americans fell back to their second line of defense, along Madison Street.  Outnumbered, they withdrew to the Pocahontas Bridge across the Appomattox River, fought a delaying action there, and withdrew. 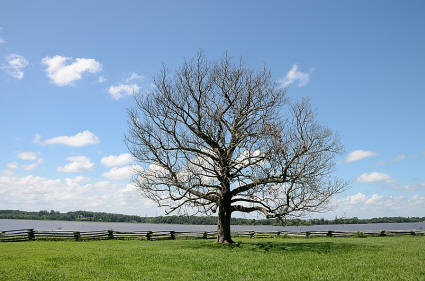 The British occupied Augusta, Georgia on January 31, 1779 without opposition.  Loyalist Colonel Thomas Brown, in command of the Florida Rangers, withdrew from the city following the American win at Kettle Creek on February 14, 1779, but after the British defeated an American force under General Benjamin Lincoln at Brier's Creek on March 3, 1779, Georgia again became a Royal Colony and Brown re-occupied Augusta.  In September 1780 an American militia attack led by Colonel Elijah Clarke failed when British reinforcements came to the defense of Brown.  By spring 1781, with General Nathaniel Greene now in command of the American Southern Army, British garrisons at Augusta and Ninety-Six became targets.  Once again, Clarke commanded his militia units, along with General Andrew Pickens of South Carolina; Colonel Henry Lee and Major Pinketham Eaton led the Continental forces.  They captured Fort Grierson on the western edge of the city on May 24, where Eaton was killed.  Besieged in Fort Cornwallis to the east, Browne was forced to surrender on June 5 as a result of the American construction of a Mayham Tower (on the site of the Cotton Exchange) that permitted cannot fire down into Fort Cornwallis.  By August 1781, Georgia returned as a state to the American cause. 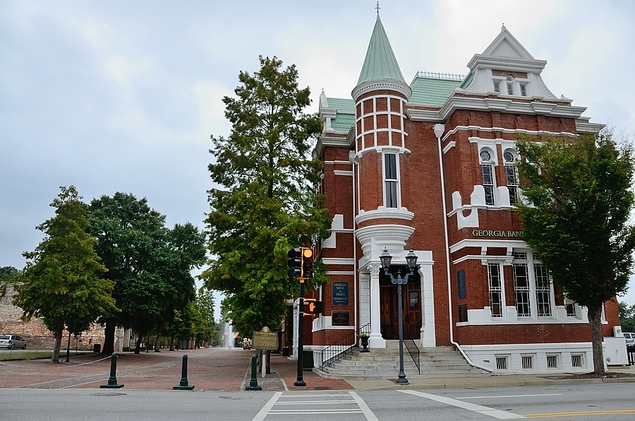 Ninety-Six was the site of a siege and battle in November 1775 between Patriot and Loyalist forces, resulting in a stalemate.  From May 22 through June 18, 1781, it was the scene of an attempt by American General Nathanael Greene to take the fort, held by Loyalist forces under Lieutenant Colonel John Cruger.  The British held various outposts in the Southern theater; Augusta was besieged the same day.  Greene approached the "star fort" at Ninety-Six through traditional construction of siege lines, but a fierce and well-executed counterattack by Cruger and the imminence of relief by Francis Rawdon (The Lord Rawdon)'s British forces caused Greene to withdraw.  The British and Loyalist forces abandoned the fort not long after.

In the last significant action prior to the surrender by the British army at Yorktown, the British achieved victory at Green Spring on July 6, 1781.   Cornwallis was without a base in a state where the Continental Army maintained a major presence.  He needed to find a place where he could resupply his army and be reinforced by Clinton.  Having spent ten days at Williamsburg, he headed for Portsmouth.  To lure out Lafayette, Cornwallis sent his baggage across the James River near Jamestown, and hid his main force in a wooded area at Green Spring.  Lafayette believed that the British had crossed and he was attacking the rear guard.  Upon realizing his mistake, Lafayette sought to warn "Mad Anthony" Wayne of the trap, but failed.  Wayne also thought that the main British force was across the James River and he was engaging its rear guard.  Essentially, he charged with 800 men against a 5,000 man force of British and Hessians, including cavalry under Banastre Tarleton.

On July 17, 1781, British forces retreating from Monck's Corner towards Charleston were attacked by militia forces under American General Thomas Sumter.  American Colonel Henry Lee attacked the British about a mile from this area, and the British fell back.  The British again fell back after the fight at the bridge to nearby Shubrick's Plantation established a defensive position.  Against the advice of General Francis Marion, Sumter nonetheless ordered an attack.  After three hours, it failed and Sumter retreated.  30 Americans died and 30 more were wounded in an engagement involving some 550 Americans and approximately 600 Regulars and Loyalists.  Many of Marion's men deserted, and Marion did not fight under Sumter again.

The Battle of Groton Heights was a two-pronged assault by the British led by the former Patriot Benedict Arnold, now a British Brigadier General.  The Thames River separates New London and Groton, Connecticut.  On September 6, 1781, while the war raged savagely in the Carolinas and Cornwallis headed for his doom at Yorktown, Arnold launched his own fierce and brutal raid on his home colony, Connecticut.  Two forts controlled the river:  Fort Trumbull on the western, New London side, and Fort Griswold on the eastern, Groton side.  Fort Trumbull was defended by 23 men under Captain Adam Shapley, who fired one volley, spiked the fort's guns and then departed across the river for Fort Griswold.  American Lieutenant Colonel William Ledyard, a native of Groton, was in command of Fort Griswold.  He commanded approximately 150 men.  The British force of Regulars, Hessians and Loyalist forces, numbering about 800, were led by Lieutenant Colonel Edmund Eyre.   British officer, Major William Montgomery, led an attack from the north.  Regardless, the Americans were severely outnumbered and the British overpowered them.

138 Americans were killed at the Battle of Eutaw Springs, South Carolina on September 8, 1781.   Eutaw Springs serves as a bloody bookend to the war at the tail end, around the time of Yorktown.  British Colonel Alexander Stewart was in charge of the British forces at Charleston.  He took 2,000 men to search for Greene's army and while camped at Eutaw Springs, Greene attacked with about 2,200 men.  Though his men drove the British back and should have won, they started plundering the British tents.  The British made a well-defended stand around a brick house near the river, under command of Major John Marjoribanks, and turned the tide against the Americans.  Marjoribanks was killed and is buried on the site.

Realizing his attempt to stabilize the Carolinas would not be successful, General Charles Cornwallis moved towards the Virginia coast.  He fortified the area around Yorktown and across the York River in Gloucester in August 1781.  Washington, assured now of French support, seized the opportunity for a conclusive confrontation and marched his forces south.  A significant French naval win precluded any chance of evacuation by Cornwallis.  The combined French and American forces of almost 16,000 men opposed approximately 8000 British troops.  Beginning with siege lines that advanced towards the British position, Washington then launched attacks on the redoubts.  One of the more spectacular assaults, on Redoubt 10, was led by Alexander Hamilton.  The surrender of Cornwallis did not end the war but made British defeat inevitable.